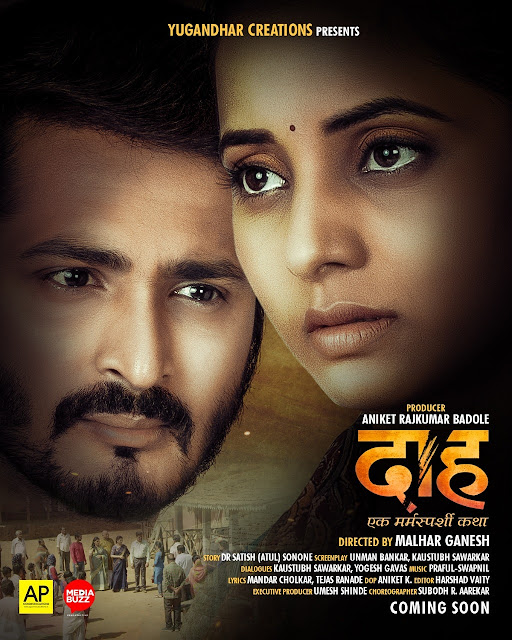 by Shrutee K/DNS
Every person attaches great value to the relationships in their life. The companionship that relations offer is a source of strength to bear the sorrows of life and the multiplier of joy in moments of happiness. 'Daah Ek Marmasparshi Katha' is a movie that displays this very significance of relationships.
Presented by Yugandhar Creations and produced by Aniket Rajkumar Badole, 'Daah', has been directed by Malhar Ganesh. The story has been written by Dr. Satish (Atul) Sonone. The leads in the movie have been played by the popular television and movie actress Sayali Sanjeev and actor Girish Oak. Along with the lead star cast, Radhika Vidhyasagar, Suhrud Wardekar, Yatin Karyekar, Uma Sardeshmukh, Kishore Chougule too will be seen in significant roles.
The film is a family drama. This is the story of a happy couple, the idealistic and religious lady Mrs. Sane and the well-known Doctor Mr. Sane. The couple's happiness multiplies on the birth of their daughter 'Disha'. But will their happiness last forever? Is Disha their daughter by birth or has she been adopted? If she has been adopted, will she be happily accepted? All these questions will be answered in the coming New Year 2020.
Along with the story, the songs of the movie too will touch the hearts of the audience. Music Director Praful-Swapnil has composed the music. Lyricists Mandar Cholkar and Tejas Ranade have beautifully penned the heart-touching songs. The melodious voices to these songs have been lent by singers Swapnil Bandodkar, Manish Rajgire, Aniruddha Vankar, Bela Shende, and Madhushree.
The movie has been scripted by Unman Bankar and Kaustubh Sawarkar for the silver screen. Umesh Shinde is the executive producer of the movie.
'Daah Ek Marmasparshi Katha' is a new movie of actress Sayali Sanjeev where she can be seen essaying a completely different role will be releasing in 2020