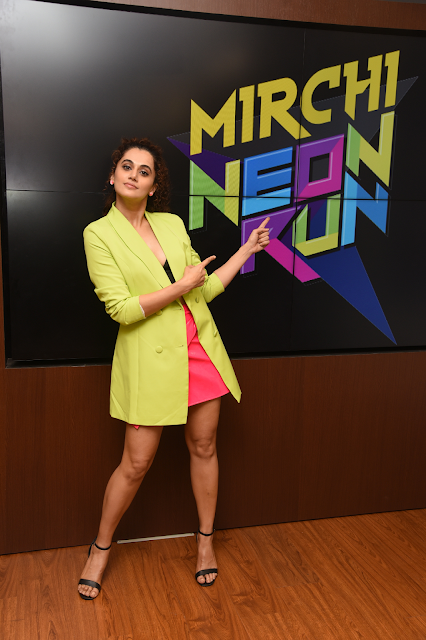 by Shrutee K/DNS
Mumbai, December 13, 2019- Mirchi is all set to kickstart the fifth edition of the 'Mirchi Neon Run' with their glowing brand ambassador Taapsee Pannu. Started in 2015, this party run is inspired by international Neon theme-based runs and brings together partying and fitness to create an unforgettable experience. With a Zumba warm-up session, a finale post-run after party and loads of exciting neon glow-in-the dark merchandise and accessories, this 3km run promises to set the city aglow with its #GlowGuilty vibes!
The youthful, vibrant spirit of this recharged edition of Mirchi Neon Run was perfectly captured at the neon-themed press-conference held at Mirchi’s Mumbai office. Taapsee Pannu, dressed in neon attire launched the Neon Anthem along with Mirchi’s very own RJ Arjun amidst much fun and fanfare. Tickets for the event are now LIVE on mirchineonrun.com and BookMyShow. 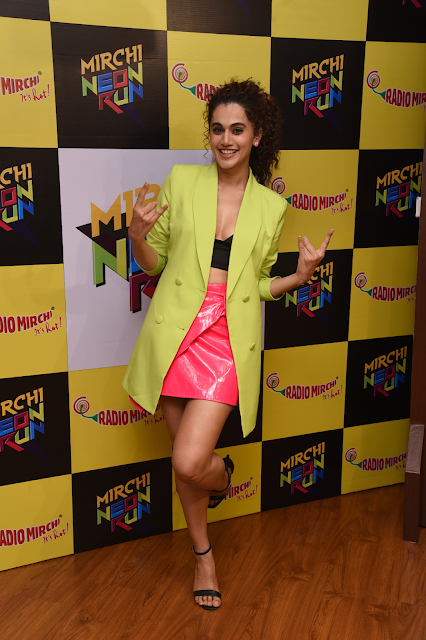 Brand Ambassador Taapsee Pannu said, “It’s my second year as the brand ambassador of Mirchi Neon Run and it’s just as fun and exciting as it was the first time. There’s no guilt in having a blast and living life to the fullest which is what the #GlowGuilty campaign is all about. Mirchi Neon Run will be happening across 21 cities in India this year and I hope all of you guys come down to party at the most glowing event of the year.”
Mirchi spokesperson said "Owing to its success over the past couple of years, we are keen to give our Neon Run enthusiasts an even more rocking experience this year. In its 5th edition, we are launching the #GlowGuilty campaign which brings out the essence of Mirchi Neon Run. We invite everyone to come out and join us.”
About Radio Mirchi: Entertainment Network India Limited (ENIL), popularly known as Radio Mirchi, owns 73 frequencies and is advertising partner for another 3, across 63 cities in India, making it India’s largest private FM radio broadcaster. Launched in 2001, Mirchi now operates across the country with 4 distinct brands - Mirchi, Mirchi Love, Kool & Ishq (for which it is the advertising partner of TV today network). With the highest radio listenership in India (approximately 38.2 million people) and a track record of developing innovative content, Mirchi has been expanding and retaining its audiences and advertisers through the years.

Mirchi has consistently delighted listeners and the industry with exciting properties such as Mirchi Music Awards (in 8 languages), Mirchi Cover stars & Mirchi Top 20. It is also the biggest concert player in India and organizes almost 100 concerts every year. It has gained a strong position in the digital space too. 22 online radio stations, the biggest radio website & being the biggest on Facebook, Twitter & YouTube are a few accolated under its belt. Mirchi also leverages talent to produce Original content shows which are put on its YouTube channels and various OTT platforms. It reaches 50-60 million people through its online content every month. Mirchi was also the first Indian radio brand to go international with the launch of the brand in the UAE. It then launched in Bahrain in March, 2018. On 26th January, 2019, it launched in the US. The first brand to start ‘airport radio’ operations, Mirchi can be heard at T3 international airport, New Delhi and Rajiv Gandhi International Airport, Hyderabad. With such a wide presence, on-air, on-ground & on digital; way beyond FM radio the Mirchi brand truly has unlimited potential!