Mumbai, December 2019: After a phenomenal first season, ‘Smule Mirchi Cover Star’, one of India’s largest digital singing talent hunts hosted by Radio Mirchi, is back with season two. Presented by Smule, the world’s favourite social music making app, the contest is now Live. The talent hunt is a coveted platform for youngsters to showcase their singing talent and offers winners a once-in-a-lifetime opportunity to perform at the 12th Mirchi Music Awards in Mumbai in the presence of leading icons of the Indian music industry.

Smule is returning as the title sponsor for the talent hunt after a hugely successful first edition that saw over 50,000 unique entries.
Interested participants simply need to download the Smule app and sing their cover entry. Smule is backed in India by Times Bridge, an investment arm of the Times Group.

Bill Bradford, President, Smule said: “India is a strategic market for us and a key part of our truly global community. Smule Mirchi Cover Star is a terrific way of not just unearthing and investing in local talent, but also of establishing our credentials as the most innovative and impactful musical performance platform. We want to use the mobile phone to connect people through music and bring it back to its social roots.” 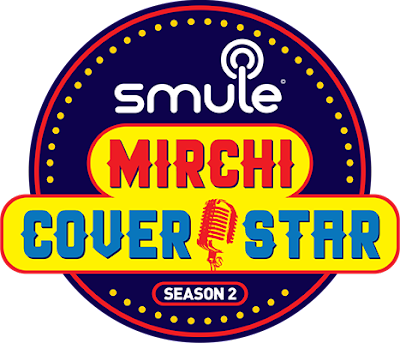 Viral Jani, Senior Vice-President, Investment Operations, Times Bridge, added: “Our mission at Smule India is to give our users an unparalleled sing-along experience. Offering a national canvas makes Smule Mirchi Cover Star a unique platform to showcase musical talent in a truly democratic and accessible way. It’s an unmatched experience for winners to perform in front of prominent names of the music fraternity.”

Yatish Mehrishi (Chief Operating Officer), Radio Mirchi: “Looking at the growing trends in the singing category and the excitement that people have for such activities, we were keen to give our listeners one such innovative platform. Smule Mirchi Cover Star is a platform that not only will help people explore their hidden singing talent but also, something that people will enjoy while participating. After an amazing response in the first season we look forward to discover many such hidden gems and give the winner the stage of Mirchi Music Awards.”

In Phase 1 of the contest, all entries will be screened and the top 100 will be shortlisted. These will be uploaded on the Smule Mirchi Cover Star website (www.mirchicoverstar.com) for voting and social engagement. These form the basis for evaluation, along with the decisions of judges Jonita Gandhi and the Meet Brothers.
Thereafter, five entries will be shortlisted from the 100 for the final round. The top five will battle it out at a specially curated event with press, fans and judges. The winner will be chosen and then groomed for various performances, including at the Mirchi Music Awards 2020.

Earlier this year, Ashmik Patil was crowned the first Smule Mirchi Cover Star and performed with the Meet Brothers at the 11th Mirchi Music Awards in front of the Bollywood music fraternity. Patil said: “It’s been a life-changing experience - to be mentored by and share the stage with the Meet Brothers; I’m grateful to Smule and Radio Mirchi for the opportunity”.

Since being named the winner, Patil has gone on to perform at several live venues as well as for multiple Radio Mirchi events.

About Smule: Smule is the leading social network for music, connecting the world through a global community of millions of music enthusiasts. Smule’s flagship app lets people sing and make music with friends and major artists around the globe—helping to bring music back to its roots of creation and participation.  Smule is available on iOS and Android.

About Radio Mirchi: Entertainment Network India Limited (ENIL), popularly known as Mirchi, owns 73 frequencies and is advertising partner for another 3, across 63 cities, making it India’s largest private FM radio broadcaster. Launched in 2001, Mirchi now operates across the country with 4 distinct brands- Mirchi, Mirchi Love, Kool &Ishq (advertising partner of TV today network). With the highest listenership across the country and a track record of developing innovative content, Mirchi has been expanding and retaining its audiences and advertisers through the years.  Mirchi has delighted listeners and the industry with its exciting properties such as Mirchi Music Awards (in 8 languages) & Mirchi Top 20. Mirchi is also the biggest concert player in the country. Mirchi’s initial foray into digital space has helped it gain a strong position- 23 online radio stations, biggest radio website & biggest on Facebook, Twitter &Youtube. Mirchi was also the 1st Indian brand to go international with the launch of the brand in the UAE. Mirchi also launched in Bahrain on 18th March 2018. Mirchi can also be heard at T3 international airport, Delhi. With such a wide presence, on -air, on-ground & on digital, Mirchi is truly everywhere! ENIL is listed on the BSE Limited and the National Stock Exchange of India Limited.

About Times Bridge: Times Bridge is a leading investment firm with a mission to bring the world’s best ideas to India and share India’s best insights with the world. Its current portfolio includes Airbnb, Coursera, Houzz, Smule, Uber and Wattpad, among others. By providing unmatched market leadership to its select partners and by harnessing the assets of The Times Group, India’s largest media company, Times Bridge accelerates growth and immersion across the Indian subcontinent for leaders who believe in winning in and learning from India. For more information, visit http://timesbridge.com and follow @timesbridge on Twitter