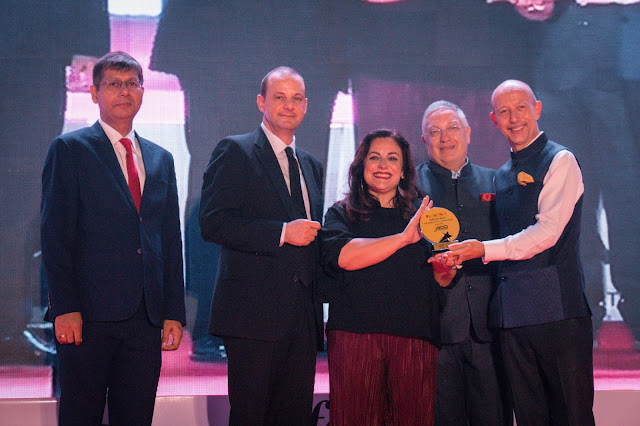 Pune, December 19, 2019: Ferrero, the globally renowned chocolate and confectionary company has won the Outstanding Performance in Food Safety Excellence, under the category - Large Manufacturing Food Businesses, Confectionary and Indalian Milestones award at the Festa Italiana 2019. Organized by CII (Confederation of Indian Industry), the Food Safety 2019 award is one of its kind and focuses on Food Safety Maturity Assessment to promote excellence.

Recently held, the events witnessed global leaders from across various industry verticals under one roof, including the presence of Shri Pawan Kumar Agarwal, Chief Executive Officer, FSSAI and members from GFSI (Global Food Safety Initiative) at CII event. Festa Italiana 2019 awards, organized by the Indo-Italian Chamber of Commerce and Industry (IICCI) was graced by Stefania Costanza, Consul General of Italy along with other diplomats from the embassy.

Today Ferrero is ranked No. 1 in the world for Reputation in the food industry by Reputation Institute, USA. Ferrero India has demonstrated business endurance in last 12 years of its operations in the country with well-known brands - Ferrero Rocher, Tic Tac, Kinder Joy, Kinder Schoko-Bons Crispy and Nutella. The state-of-the-art production plant which was set up at Baramati in 2007 is driven by the core values of high quality, consumers’ trust and the entrepreneurial initiatives for the community.

Commenting on the occasion, the Ferrero India spokesperson said, “This recognition reiterates our commitment to providing quality and excellence. It is a great achievement for us as two different organizations have recognized Ferrero’s efforts and considered it as the best company in safety and quality. The success also marks the initiatives undertaken by Ferrero India to improve the living standards of the local community. We are delighted to see the consumers’ trust and loyalty for Ferrero and its products in India.”

The Festa Italiana awards aim at recognizing the efforts, approaches and results achieved by the Indo-Italian companies in India. Categories included were Indalian Milestones, Fashion Collection by Istituto Marangoni and Vetrina Italiana.

About Ferrero India: Ferrero India started its commercial operations in 2004. In 2007 the Government of Maharashtra bestowed a mega status project for its state-of-the-art production plant at Baramati near Pune.   In less than a decade, Ferrero has become a strong player in the chocolate and confectionary segment in India. The company has made India a production hub for Asia and Middle East and exports half its local production. Ferrero’s well-known brands in India include Ferrero Rocher, Tic Tac, Kinder Joy, Kinder Schoko-Bons Crispy and Nutella.

The company has its Corporate Office at Pune and regional sales offices at Chennai, Delhi, Kolkata and Mumbai. It has a robust distribution network across all the metros and mini-metros of India. The company has won several awards including the Impresa Award for People Empowerment; the Best Human Response Award; Kronos Excellence Award for Work force management; Supplier Excellence Award and the CII Award for commitment to Food Safety.

Ferrero is one of the few food companies in India to install rooftop Solar Power at their manufacturing unit in India. Ferrero has invested approx. INR 10 crores in this Solar Power project. This project is built on an area of 30,000 square meters and covers 12.4% of the total factory load. In this way, Ferrero is reducing its carbon footprint and protecting the natural eco system and is committed to making the lives of people better in the community.

Ferrero has set up the Pietro Ferrero Kindergarden at Baramati to safeguard health, education and social development of children under the motto: United Kinder of the World. The Pietro Ferrero Kindergarden is a home away from home for children of employees as well as children from the nearby community. Their needs for early childhood education, play and development; nutritional food, personal hygiene, healthcare, social skills are taken care of well. The Kindergarden caters to children between the age group of 6 months to 6 years.

In 2014, Ferrero launched the Kinder+Sport ‘Joy of moving’ program, which is an international Ferrero Group Social Responsibility Project that aims to bring joy of movement into the life of every child. Kinder+Sport program works on a global scale involving 30 countries and gets 5 million children moving every year. Over 500 children participate in the Kinder+ Sport camps held at Pune and Baramati. The camp promotes and encourages physical activity, inspiring children to adopt active lifestyles from an early age, so that it becomes an integral part of their daily routine.

The company signed an MOU with Pune Zila Parshid in early 2019 to constru ct 8 Anganwadis in and around Baramati in the next 2 years thus strengthening its support for preschool education. For further information visit: www.ferreroindia.com