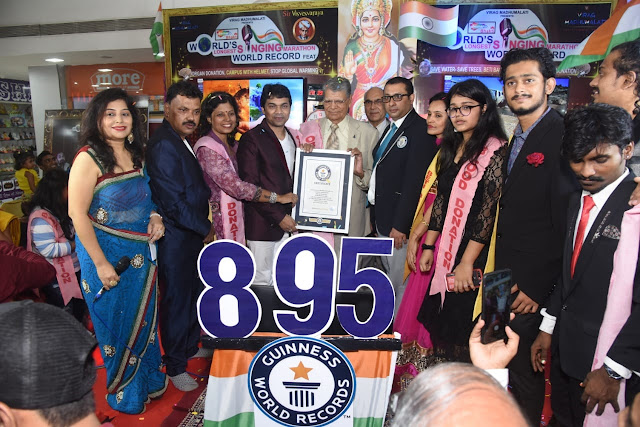 by Shrutee K/DNS
India broke China’s record of non-stop karaoke singing for 792 hours, 2 minutes, with 895 hours, 4 minutes non- stop singing, to enter the Guinness Book of world records at a program organised at Little Mall located at Kharghar in Navi Mumbai on Sunday.
The feat was achieved by Virag MadhuMalati and his troupe. Guinness World Record official Adjudicator Rishi Nath, Banarasi Lal Chawla, Father of Indian American astronaut late Kalpana Chawla, Retired principal scientist Premprakash Atreja and others were present on the occasion.
Rishi Nath in his speech, said that he was delighted that India broke China’s record to set a new record of 895 hours, 4 minutes non-stop singing. “My best wishes to Virag MadhuMalati for his future endeavours”.
“I am very delighted to see dedication and patriotism of Virag and his team. Our generation, present generation and future generation will certainly support anyone dreaming to contribute for national progress with such ventures. To shape up our country and boost India’s image in the world is in our hands and as such it is essential to initiate steps in this regard”, Premprakash Atreja said.
Banarasi Lal Chawla, father of Indian American astronaut late Kalpana Chawla said that he was very happy to participate in this function. “I am not keeping well for the last three years but I was enthused by this function. This project is laudable and would certainly give a new direction to people. By high thinking we can lead our country towards progress. This is a new feather in India’s cap and will certainly inspire Indians to achieve dizzy heights not only in singing but also in other fields. This is a proud moment for every Indian”. He urged people to think high and rise above religious politics for the progress of the nation. “Such attitude will benefit one and all”, he added.
“I have no words to describe my delight in dedicating this world record to the nation. I am proud that I was born in India, Today is a golden day and credit for this success goes to all members of my team. It will be my aim to boost the image of India, in future too, Virag MadhuMalati Wankhede said.
Over 800 singers from Delhi, Kerala, Chennai, Andhra Pradesh, Odisha, Rajasthan and other states sang over 9000 songs, delighting music lovers for 38 days. The program was organised at Little World Mall, Kharghar, Navi Mumbai between 15 November and 22 December 2019, to promote social projects including “National Integration”, “Beti Bachao-Beti Padhao”, “Stop Global warming”, “Campus with Helmet”, “Save Water, Save Trees” and “Organ Donation”. A grand finale was held on Sunday.
Four cameras were installed at the venue and observers were deployed to record the movements at every second. Bollywood singers, actors, political heavyweights and prominent personalities from different fields paid visits to witness this musical history.
Virag MadhuMalati has four world records to his credit, which he has dedicated for national integration and eye donation awareness.