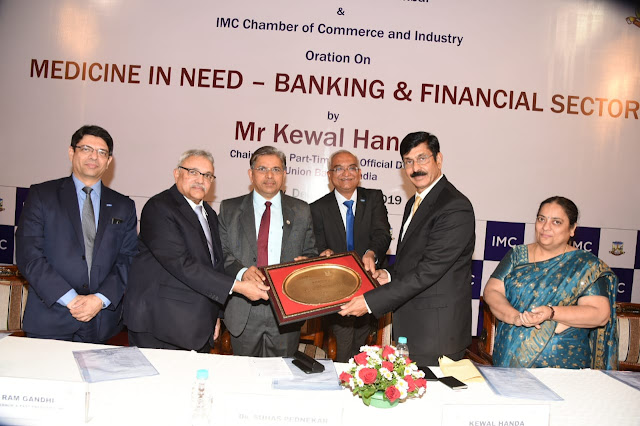 Speaking at the 7th Memorial PVG Lecture on Banking and Finance, Mr. Handa, said that the medicine for the present day Banking crisis is to reintroduce the spirit of banking while confining within the rules and procedures of Banking.  Too much stress on complying with the rules is hampering the performance of the Banking business.  He stressed the need to recruit talent from the market at market related compensation and not be constrained by the government policies, as talent crunch is impacting the banks performance.

In his prescription to revive the economy, he suggested that the sole agenda of the Government should be to talk to different stakeholders for building trust and confidence and work out ways and means of economy revival.

Earlier welcoming the Chief Guest, Mr. Ashish Vaid, President, IMC, said the present cyclical down turn in banking can be constrained if the banks leadership take up challenges of financing the SMEs and agricultural sector to boost trade and increase the income level.

Dr. Suhas Pednekar, Vice Chancellor, University of Mumbai also spoke at the occasion and shared that the University has recently won the Asia Specific Heritage Award.

The Chair was set up in June 2011 with IMC’s contribution of Rs. 2 crores to the University of Mumbai. This donation was given by the Chamber to perpetuate the memory of its patriarch Mr. Pravinchandra Gandhi –  who was closely associated with IMC for over six decades - - as its president in 1962 and Trustee since 1967.

About IMC: Set up in 1907, IMC is an apex Chamber of trade & commerce with headquarter in Mumbai. It has about 2700 direct members, comprising a cross section of the business community, including public and private limited companies and over 215 trade and industry associations through which the Chamber reaches out to over 2,50,000 business establishments in the country. IMC is the first Chamber in India to get ISO 9002-2000 certification which has since been upgraded to ISO 9001: 2008. IMC is the only business Chamber in India where, the Father of the Nation, Mahatma Gandhi, was associated as an honorary member.