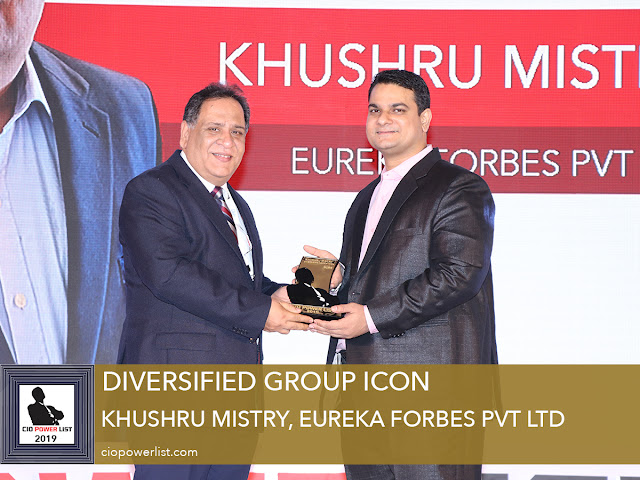 Mumbai, Maharashtra, June, 2019–Khushru Mistry, SVP IT and CIO, Eureka Forbes Pvt Ltd, was recognised as Diversified GroupIcon at CIO Power List 2019, the list of the most influential technology leaders in India.The country’s most powerful and outstanding CIOs and ICT leaders driving the digital revolution were recognised at a star-studded ceremony spread across two days—May 10 and 11—presented by CORE Media with Knowledge Partner KPMG, at The Westin in Pune.

Now in its 5th edition, CIO Power List seeks to recognise innovative thought leadership accelerating marketplace disruption,business growth, and customer engagement. CIO Power List awardees are the game changers of the ICT community who are reinventing industries and creating a new value system, driven by IT now being at the helm of innovation in business. This year, over 100 CIOs from across industries were recognised across two main groupings and across 34 categories —Business Icons, classifying industry verticals,or Technology Icons, classifying technology horizontals. These categoriesranged from E-Commerce to IoT, Artificial Intelligence,Hyper Converged Infrastructure, Mobility, Bankingto Manufacturing.

“My hearty congratulations to all the CIO Power List 2019 winners! These are the leaders changing the rules of engagement, seizing the wave of disruptive technology, and making the most of corporate IT’s growing power and influence over business. Technology is fundamentally changing the way any business operates and it is these visionaries who are shifting the narrative and ushering in unprecedented growth for an edge over the competition. With technology developing and adapting at an astounding rate, we’re in for an exciting time ahead!” says Anoop Mathur, Founder and President, CORE Media.

The CIO Power List 2019 awardees were finalised on the basis of an algorithm that takes into account a wide range of data collected on CIOs across multiple channels. These include the CIOs online reputation, business publications and technology magazines, combined data on awards, honours and recognitions won,achievements till date, a random sampling of social media engagements, and a national survey of peer CIO sentiments. Additionally there are inputs from the CIO himself/herself on their key moments in the past year.

“CIO Power List is a platform that has been created to recognise CIOs leveraging the power of technology to drive innovation and transform businesses. It brings together top technology leaders in the country for an exchange of ideas and perspectives on some of the most pertinent and emerging topics. I wish this year's winners all the very best,” says Kunal Pande, Partner, KPMG.

Quote by K M Mistry
Being a digital CIO marks the confidence to be an evangelist at the same instance to manage the changing dimensions of the business, and switch between them without loss in translation or interactions.

About CORE Media: Founded in 2012, CORE Media (Centre of Recognition & Excellence) is a multi-platform new age niche media company that owns and operates proprietary marketing events, account based marketing (ABM) solutions and digital platforms with a focus on ICT Enterprises, the CIO Community and Technology Startups.The company has the power to influence the end-to-end value chain in the B2B technology space with its media and marketing products.Today CORE Media is the fastest growing IT media and marketing company in India within the B2B technology space.