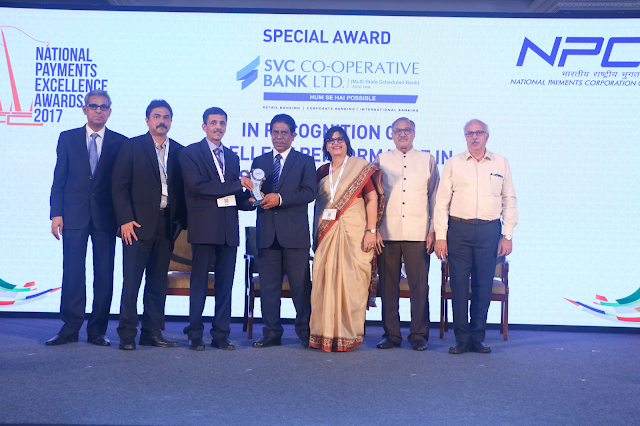 Jaipur, June 12, 2018: SVC Bank (SVC Co-operative Bank Ltd.), earlier known as The Shamrao Vithal  Co-operative Bank Ltd. has bagged the coveted National Payments Excellence Award 2017 awarded by National Payments Corporation of India (NPCI) recently. The award is the highest recognition in the industry for exceptional performance in payments system. SVC Bank has been awarded for its outstanding performance in NFS ATM Network & CTS.
NPCI’s awards celebrate excellence underlining the efforts taken by the banking fraternity in pursuit of the Digital India Initiatives, undertaken by the Govt. of India and RBI with emphasis on making the Indian Digital Banking System one of the best in the world.

"It’s only a matter of time when we will see our nation become entirely digital. There are efforts being made to graduate from the cheque system to card system and eventually to UPI system in order to provide more convenience to customers, lessen the risk of fraud and thereby get more people included in the digital banking umbrella,”  said Mr. Ajit Venugopalan, Managing Director, SVC Bank. "NPCI’s recognition of good work is certainly encouraging and a morale-booster,” he added.
The awards were given away at a glittering function held at Hotel Taj Lands Ends, Mumbai.  With Mr. B.P.Kanungo, Deputy Governor, Reserve Bank of India as the chief guest, the event was attended by the who’s who including  Mr. Biswamohan Mahapatra – Chairman, NPCI, Mr.  V G Kannan – Chief Executive, IBA and Dr. A. S. Ramasastri – Director, IDRBT

About SVC Bank
Set up in 1906, SVC Bank has contributed significantly to the development of the cooperative movement in India for over a century. Today, the bank is one of the oldest and most recognized names in the country’s co-operative banking space and remains the India’s only multi-state scheduled bank with a presence across 11 states. It is also the first and only bank to develop and offer ‘Genius’ – a core banking solution to more than 80 other cooperative banks. SVC Bank has already revamped its entire banking system to embrace digitisation and adopt new technologies, mainly to cater to the youth of the country. With a total business of over Rs. 25000 crores plus and a net profit of Rs. 131 crores (FY 17-18), it has proven its strong fundamentals. The Bank offers the entire gamut of services across Retail Banking, Corporate Banking and International Banking. Headquartered in Mumbai, the Bank has a vast spread of 198 branches and has an employee strength of over 2500. For more details visit www.svcbank.com