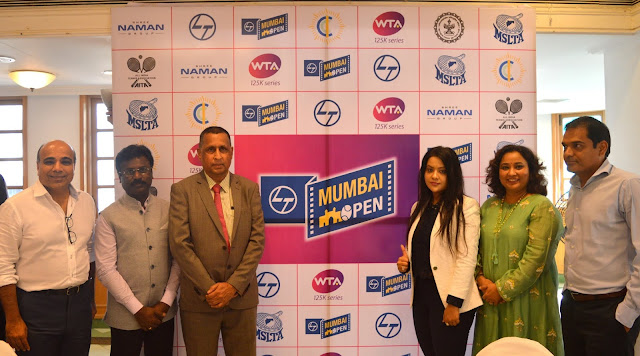 by Shrutee K/DNS
Mumbai, October 24, 2018: World ranked 57 and fast rising 24-year-old from China, Zheng Saisai, who won her last WTA title as recently as April of this year, has been given pride of place and will lead a field of leading players from 19 countries in the 2nd edition of the L&T Mumbai Open WTA $125K Series, which will be organized by the Maharashtra State Lawn Tennis Association (MSLTA) and the Cricket Club of India (CCI), to be played at the CCI courts from October 27 to November 4, 2018.
This was announced by Ms Amruta Fadnavis, Chairperson of the Organizing Committee, in the presence of Ms Pallavi Darade, IRS, Organizing Secretary, Tournament Directors Mr. Prashant Sutar and MSLTA Secretary Mr. Sunder Iyer.  Also present on the occasion were Mr. Bharat Oza, President MSLTA, Mr. Premal Udani, President CCI, Jayesh Shah, CMD Shree Naman Group and CCI Tennis Secretary Sachin Bajaj. Zheng will be followed by last year’s runner-up and World No. 79 Slovenian Dalila Jakupovic, USA’s World No. 94 Sachia Vickery and Serbia’s World No. 96. Olga Danilovic.
The Indian challenge will be spearheaded by Ankita Raina, who won the hearts of the tennis fans when she reached the quarter finals last year.
“L&T has had a tradition of supporting sporting events in the country and we are delighted to continue partnering MSLTA for a second year to bring serious tennis back to India,” said Mr. P Niranjana, Vice President & Head Special Projects & Bridges, L&T Construction. “The L&T Open presents a wonderful platform for lady players from India to compete with some of the best in the world and that will only do the game a world of good,” he added.
Speaking to reporters, Amruta Fadnavis said, “We got a huge response last year because of the joint effort put in by the organisers and the government officials working behind the scene. This year we have set even higher standards and a grand stage has been prepared to welcome the world’s leading women players. Maharashtra has been in the forefront where promoting tennis is concerned and the L&T Mumbai Open will give our own players another opportunity to compete on the world stage. I thank the Cricket Club of India for the wonderful infrastructure provided to this event and am confident that the players will take back wonderful memories from the event,” Amruta Fadnavis added.
Ms Pallavi Darade, Secretary, Organizing Committee said, “Being the last tournament of the year on the WTA calendar, the tournament will witness tough contests, with players vying for maximum WTA points, which will help them gain entry into the first Grand Slam of the year, the Australian Open. “We are happy that the event will provide players from India an opportunity to play in home conditions and hope they get valuable points to move up the WTA ladder. The L&T Mumbai Open was very well received by international players and the WTA,” she added. Sharing Information on the player’s field, Tournament Directors Prashant Sutar and Sunder Iyer said he list has at least 5 players who have a WTA tour event title,which makes the tournament interesting.
While top seed Zheng has two singles and three doubles WTA titles to her credit, the other seeded players will be formidable opponents. Second seed Dalila, currently ranked 79, was ranked a modest 252 and unseeded when she played this event last year and created history by reaching the final, before losing to Aryna Sabalenka. 17-year-old fourth seed Olga Danilovic the former French, US and Wimbledon Junior Doubles champion, is also in good form, having won her first WTA singles title in September this year winning the Moscow River Cup. She also has a WTA Doubles title to her credit.
The other notable names in the main draw are fifth seed Luksika Khumkhum of Thailand, who reached the third round and second round of the 2108 Australian Open and Wimbledon respectively, Russia’s Vera Zvonareva, a former World No 2, a bronze medalist at the Beijing Olympics and runner-up in 2010 at the Wimbledon and US Open.  Former Top 30 player, Russia’s Margarita Gasparyan, winner of the Tashkent Open WTA singles event, who is returning after a long layoff, Japan’s MisakiDoi, a former World No. 30 and Hibino Nao, winner of one WTA title and a former top 30 player, are some of the other contestants to watch out for. Ankita Raina, who won the hearts of the tennis fans with her gutsy display last year, which saw her reach the quarter-finals has made it to the main draw. Sabine Lisickiis a former World No.2, who was Wimbledon singles runner-up in 2013, losing to Marion Bartoli, a Wimbledon semi-finalist in 2011 and has four WTA titles to her credit.
The Main Draw of the event will feature 32 players, from 19 countries, from which 22 players get a direct entry, with four players emerging from the qualifying rounds and four players being awarded wild cards.
The winner of the event will get US$ 20,000 and 160 WTA points, the finalist will get US$ 11,000 and 95 points, the semi-finalists will get US$ 6,000 and 57 points and the quarter-finalists US$ 4,000 and 29 points. Round of 16 entrants will get US$ 2,000 and 15 points, while the main draw entry into the event will fetch US$ 1,050 and 1 point. The qualifiers would be held on October 27 and 28 while the main draw matches will commence on October 29. All the matches of the tournament will be streamed live on WTA Television and the WTA website, while live scoring will be available on the tournament website www.mumbaiopen.in