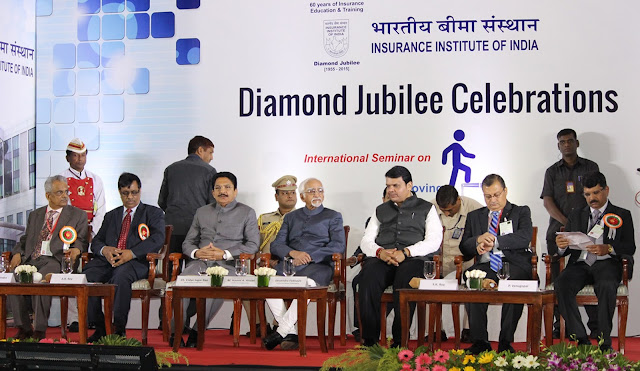 Vice President Mohammed Hamid Ansari has called upon the insurance players to develop sustainable agricultural insurance products to help rural people withstand vagaries of  nature. Speaking at the concluding ceremony of the Diamond Jubilee celebrations of the Insurance Institute of India in Mumbai on Wednesday, Shri Ansari said “it is necessary to protect the farmers from natural vagaries and ensure their credit eligibility for the next season. The high rate of suicides of farmers, and the subsequent social and economic impact on the family needs redress.”

The Vice President observed that crop insurance presently covered only about 12% of sown area and in most cases had an adverse claim to premium ratio. He said there were problems with both the design and delivery of crop insurance schemes and called for reducing the level of actuarially fair premium rates to make the insurance option attractive and affordable.

Shri Ansari said agriculture in India was highly susceptible to risks like droughts, floods, pests and diseases. “These problems could be overcome to some extent with rainfall insurance with a well developed rainfall measurement infrastructure. Private and public insurers are currently experimenting with rainfall insurance products and the feedback seems encouraging”, he added.

Vice President expressed concern over low penetration of insurance and said  the provision of insurance for the poor, covering a variety of risks, could well be a key milestone in the fight against poverty. “Despite the growth spurt, insurance prevalence remains abysmally low. Insurance penetration or premium volume as a ratio of GDP, for the year 2012-13, stood at 3.96%. which is much below the world average of 6.3%”, he observed.
Shri Ansari cited examples of successful experiments in African nations of Rwanda, Ghana and Senegal and other countries, which have begun offering weather  indexed insurance to protect farmers at a lower cost than traditional crop insurance and with greater reliability. He said these models could be modified and adopted by us to expand the coverage of insurance in India.

The Vice President said “the Government of India has created policies to promote financial inclusion and extend insurance cover to the poor through schemes such as the Pradhan Mantri Jan-Dhan Yojana, the Pradhanmantri Suraksha Beema Yojana and the Pradhanmantri Jeevan Jyoti Beema Yojana.”. He however added that beyond the government action, the current industry structures and economic models were not yet conducive to its large scale success. “The main challenge is to encourage poor households to invest in insurance, as one of a menu of social protection instruments”, he said.

Shri Ansari said,  for micro-insurance to succeed, demand had to be generated through building awareness, rationalizing the subscription costs to income levels and creating specific and simple products, besides simplifying the processes of underwriting and claims management.
Maharashtra Chief Minister Devendra Fadnavis also stressed on insurance penetration and said “insurance penetration serves as a barometer of a country’s development. Governor of Maharashtra, C Vidyasagar Rao, Chairman of LIC of India, S.K.Roy, President of the Insurance Institute of India, A K Roy and Secretary-General P.Venugopal were among those present.

About the Insurance Institute of India

The Insurance Institute of India, , formerly the J.C. Setalvad Memorial Federation of Insurance Institutes, was setup in 1955 for the express purpose of promoting Insurance Education and Training in the country. The Institute conducts professional exams viz : Licentiate, Associateship, Fellowship and specialized Diplomas in various branches of life and general insurance and also regulatory exams for insurance agents and surveyors of public and private sector insurance companies. The qualifications of the Institute are recognized by the insurance industry, trade associations, government bodies and the Insurance Regulatory & Development Authority of India, IRDAI.